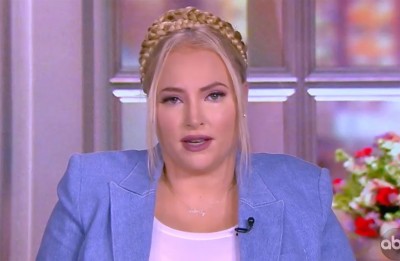 This is Meghan McCain’s last week on The View and all I can say is good riddance. Somewhere back when, I think I thought she wasn’t so bad as far as Republicans go and her father certainly had my respect for a lot of reasons.

But she has really been an irritating part of The View the past few years and a lot of it has to do with simple manners.

Yesterday, McCain ripped into Kathy Griffin after the Griffin announced she was undergoing treatment for cancer! McCain’s reason: She will never forgive Griffin for the homophobic jokes she made about her pal Clay Aiken two decades ago.

Turns out McCain is the only one holding a grudge as Aiken posted a tweet earlier today making public his support of Griffin. He doesn’t mention McCain – and doesn’t need to:

Love and prayers for a speedy recovery to my dear friend @kathygriffin!
Selfless and gracious, she even hosted a fundraiser for my congressional campaign years ago.
Get well soon Kathy. I miss your jokes! ❤️ pic.twitter.com/dR7NY4FzJD