Clay Aiken has potty mouth in “The Runner-Up” 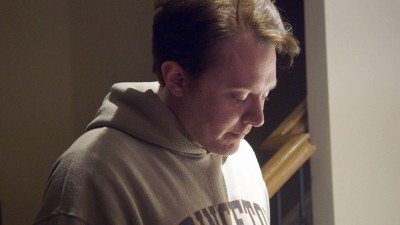 Clay Aiken’s squeaky clean image from his long ago American Idol days is nowhere to be seen in The Runner-Up, the four-part documentary series premiered on Tuesday about his run for congress.

‘The truth is, cutting out the stuff where he doesn’t swear wasn’t an option–he swears all the time,’ producer Jonathan Chinn tells Reality Blurred. ‘In the case of his potty mouth, that is who he is, and sanitizing it would be disingenuous.’

In a preview of the premiere episode, the openly gay Aiken is emotional and raw when discussing the topic of same-sex marriage.

‘Last summer I met two women, a couple, and they had five kids at the table with them who all had Down’s Syndrome or some physical disability and I thought, “What the fuck is wrong with this country that these women are taking in these kids and we don’t let them get married?”‘

‘And that pissed me off – a lot,’ he said through tears. ‘Fuck people who have a problem with that. Fuck ‘em.’

A runner-up on both American Idol and Celebrity Apprentice, Aiken found himself finishing second once again in his bid for a North Carolina seat in the US House of Representatives.

He lost to Republican incumbent Renee Ellmers who garnered more than 56 percent of the vote in a heavily Republican congressional district in Aiken’s home state.

‘People say that a gay man cannot win in North Carolina and I don’t know if they’re right or not,’ he says in the documentary. ‘This is not a place to be gay.’

Aiken had no editorial control over the project.