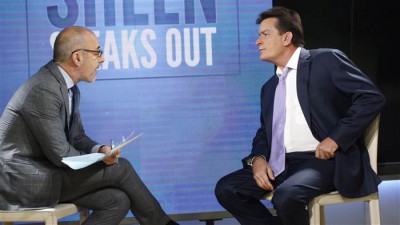 Charlie Sheen confirmed reports that he is HIV positive during an appearance on The Today Show.

“I’m here to admit that I am in fact HIV positive,’ he told Matt Lauer. ‘And I have to put a stop to this onslaught, this barrage of attacks and of sub truths and very harmful and mercurial stories that are threatening the health of so many others that couldn’t be farther from the truth.”

The actor was being blackmailed by people who knew of his status and were threatening to go public. He has paid millions in hush money, “shakedowns” he says now stop with his going public.

“I trusted them and they were deep in my inner circle, and I thought they could be helpful,” he said. Instead, “my trust turned to their treason. … I think I release myself from this prison today.”

Sheen was first diagnosed four years ago but cannot say how he became infected: “It started with what I thought was a series of crushing headaches. I thought I had a brain tumor. I thought it was over.”

“I was doing a lot of drugs. I was drinking too much. I was making really bad decisions.”

He said he hopes by going public with the diagnosis, it will help dispel the stigma of HIV.

“I have a responsibility now to better myself and to help a lot of other people and hopefully with what we’re doing today others will come forward and say, thanks Charlie,” he said.