Carrie Fisher shares all about the drugs, the breakdowns, “Star Wars” and her famous parents 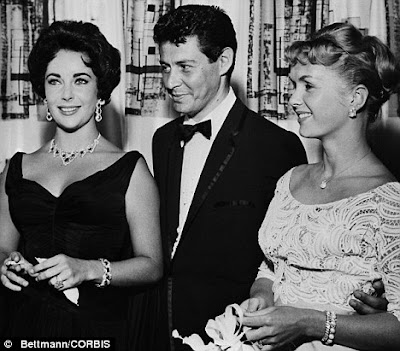 Carrie Fisher delighted us on the final day of the TV Critics Association Summer Press Tour on Saturday where she came to talk up the upcoming HBO special Wishful Drinking.

It’s a documentary of her successful stage show that has wowed audiences from coast-to-coast, most recently on Broadway. Wishful includes elements from a June 25 performance of the show at the South Orange Performing Arts Center in South Orange, N.J.  The HBO show also will feature archival footage and interviews with friends and family.

Carrie’s singer father famously left her movie star mother, the star of Singing in the Rain, Tammy the Bachelor and many other films, for Miss Taylor in the late 50s.  It was a situation that Carrie likens to Brad Pitt leaving Jennifer Aniston for Angelina Jolie.

Her mother long ago learned to have a sense of humor about it: It is 52 years ago. She has a joke about it which is, ‘The last time I saw him, he went out to cigarettes and hasn’t come back since. I said, ‘Where did you go? down the Nile?” It’s not like she’s oblivious to the humor in the situation.”

Debbie, known to younger audiences as Grace Adler’s mother on Will & Grace and Albert Brooks’ mom in Mother, has remained America’s Sweetheart and starred in such classics as The Unsinkable Molly Brown and How the West Was Won and Divorce American Style.

But Eddie did not fair so well: “He didn’t have as big a career as Brad [Pitt's] to destroy but it was considerable. It is very similar and I did point that out to Brad once at a party and he pretended at least to know what I was talking about.  It destroyed my father but it wasn’t simply that divorce that destroyed him. It was just kind of every choice after that. … My dad, he’s not the sort of bastion of good judgment.”

Throughout the years, Carrie has made peace with her early family life and come to understand her parents relationship and their 1950s image as America’s Sweethearts: “They were crippled by that. They were never really in love. They loved being loved in a way as a couple. My mother says the went onto Yankees Stadium once and 30,000 people stood up and cheered. So literally they were a concept and born in a publicity office practically and they embraced being embraced.”

“My dad was never really in my life,” she added. “I saw him more on TV than in the planet. But I have a great relationship with him today.”

Even though she was just 21 when George Lucas cast her as Princess Leia in the original Star Wars trilogy, Carrie did not plan to become an actress.

“I’ve had stage fright most of my life. It was my parents thing that they did. They put me in their shows and stuff and they had me sing. I was just terrified. I’d never go into show business, the trick would have been to stay out. I preferred writing and the solitude of it. It took me to get older to realize I was sort of a spectacle anyway.”

She starred in other films including When Harry Met Sally, The Blues Brothers and Hannah and her Sisters, but she also developed a drug addiction that was later chronicled in her autobiographical novel Postcards from the Edge (later a movie starring Meryl Streep and Shirley MacLaine).

“What I realized that when I got sober, overdosed, went to a mental hospital – all these things – it went in the paper. And my thing is: “Wait a second, if it’s going to be out there, please let my version be in it. ” Also, there is the saying, ‘You’re only as sick as your secrets. If you can claim it, it has very little power over you. I want to live on one side of the magnifying glass or the other – on the side that makes big things small or small things big. And I live on the side that makes big things small. You meet a better class of people there.”

“When the things happened at the time, I was too ashamed to talk about them so there’s great relief in just sort of being able to own this – something that happened, that I learned from and wasn’t defeated by. And if I can do that – and some of the stuff was really hard – then anybody can do it.”

She told us that her mom, Debbie Reynolds, had seen the show and joked that her reaction was: “I’m out of the will. She doesn’t have any money anyway. My mom is like any mother. She’s actually glad that I’m doing this kind of show because she thinks it’s sort of like a nightclub act so I finally understand her. So my rebellion all my life was not doing a nightclub act, not drugs – all that stuff was fine. It’s the nightclub act.”

So is she still interested in acting? Not so much it seems.

“I’m kind of typecast as this thing,” she told us. “When I was 16 years old, my mother was 40 and the movie business threw her out and I watched that. And I knew that this was not a great thing to get to be famous and it was going to fix everything and approval and then you feel love? No. You get that for a little while and then it goes and when it goes you gotta really scramble. So I did not want to be an actress at all.”

When someone asked her if she had reached that happy point in her life, she threw her head back with a guffaw: “Having gone through a lot of the things I’ve gone through, I now feel not invincible but not vincible.”

Has her mom seen your show and has she seen her mom’s which comes to the El Portal Theater in North Hollywood this fall?

“We ARE each other’s shows,” Carrie explains. “We’re more natural in unnatural situations.”

She and Miss Reynolds live next door to each other and it has the makings of what could be a terrific reality show. Like the greetings Debbie gives Carrie when she calls her on the phone: “My mother says, ‘Hello dear, this is your mother Debbie.’

After the TCA session on Saturday, about a dozen of us gathered around Carrie for some additional questioning and she was a terrific sport. I asked her if Miss Taylor had seen Wishful Drinking and what did she think: “I actually gave her an award (once) and thanked her for getting Eddie Fisher out of our house. She’s fine with it. Her grandchildren are friends of mine and my daughter. I like Elizabeth and have spent a lot of time with her. She did These Old Broads [pictured]for me and we have an interesting history.”

I also wondered if she liked living next door to her mother: “Yes, and no.”

On future screenwriting projects: “I just adapted The Best Awful, my most recent novel for Lifetime that Meg Ryan’s gonna do. Only blond, blue-eyed people play me. That’s who I am.” [Awful is a sequel to Postcards from the Edge. The Carrie-based Suzanne character was played by Meryl Streep]

On George Lucas not letting her wear a bra in Star Wars: “He has seen [Wishful Drinking] a couple of times and explained the thing about him saying there was no underwear in space.He explained that in space you get weightless so your flesh expands but your bra doesn’t: “So you get STRANGLED by your bra!” So that’s why I couldn’t wear a bra in the first Star Wars. He came backstage when I did the show in San Francisco and told me that. I said, ‘Really? Now I understand everything.”