Broadway babies Andy Mientus and Michael Arden got married in England over the weekend! 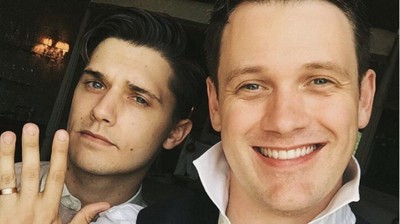 Congrats to Broadway and television stars Andy Mientus and Michael Arden who got married over the weekend in England.

Arden tweeted that they are ‘Mister and Mister’ while Mientus tweeted ‘Let me hear ya say hey Ms. Arden.’

They are currently honeymooning in Barcelona, Spain.

Mientus made history in 2014 with his role as Pied Piper on TV’s The Flash. He played the first openly gay super-villain ever. He is perhaps best known for his role as Kyle Bishop in the television series Smash.

Arden made his Broadway debut as Tom Sawyer in the 2003 Roundabout and Deaf West revival of Big River. He also appeared on Broadway in The Times They Are A-Changin’ and was a regular on the Charlie Sheen sitcom Anger Management.

The couple are so in sync that they each planned elaborate marriage proposals and happened to spring them on each other on the same day.

The dueling proposals went down in 2014 when they met in England for a holiday.

Arden had designed a scavenger hunt while the two were in Somerset with all kinds of clues that would lead to a chapel where he would propose.

When Arden went to get the keys to the chapel then met Mientus back at their room.

Before he could begin the scavenger hunt, Mientus asked him to take a look at a random YouTube video where he suddenly appeared on the screen and popped the big question.

‘You couldn’t make it up,’ Arden told me that year, ‘it’s like a Noel Coward play.’