Yes, a weekend edition of Breakfast w/Greg! I just had a cranberry muffin and coffee from Mani’s Bakery on Fairfax and it hit the spot.

Last night, my pal Eddie and I went and saw Kathy Griffin at the Universal Amptheatre (sorry, never will be the Gibson to me!) and that girl was on fire!

Laughed so damned hard. You know how you laugh so much that you kinda have to reign yourself in and start to pace yourself. It was a two-hour show and if I had kept laughing as hard as I was the first 45 minutes I woulda passed out!

First of all, there were more gays in the lobby alone than a Saturday night at Micky’s or The Abbey in West Hollywood so Kathy was playing to an audience that adores her.

I didn’t take notes because I wanted to just focus on the show so I don’t have too many exact quotes as Kathy went off on Oprah Winfrey (“The best Oprah is when she’s big fat Oprah … Oprah is so big now that her tits take up most of the screen.“), Sharon Stone (“She’s batshit crazy!), Whitney Houston (“I’m not saying she’s back on the pipe, just the half-pipe”) and her new favorite target, Miley Cyrus!

Kathy just loves Adam Lambert and says he makes Clay Aiken look butch. She also does not spare her Bravo network co-stars on the Real Housewives franchise. Since I’d only seen the first season with the Orange County women I was not too familiar with the other women Kathy trashes but it’s still pretty hilarious.

I met Gretchen and Slade from the Orange County cast and Kathy said Slade is such a skank that just talking about him gave her crabs!

Wonderfully, Kathy talked loads about her 89-year-old mother Maggie who we love: “Jesus Christ Kathleen! Goddamit, son of a bitch.” 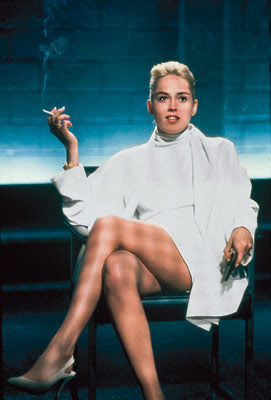 I’d like to thank Kathy for barely mentioning Levi Johnston. I think she realized that material got old real quick!  The Oprah stuff was inspired and the Sharon Stone portion was bust a gut funny. Kathy is pals with Suzanne Somers who invited her to this private dinner party and at her table were Don Rickles, Sidney Poitier, Morgan Freeman and Miss Stone.

Anyone who has ever interviewed Miss Stone or heard her speak at some kind of benefit knows she takes herself very seriously. Kathy tells the story of Sharon talking about some writing she’s doing and the star of Basic Instinct says that she realizes she is capable of killing, “but every day, I choose not to.”

Some of the news tidbits that Kathy shared: She will be on E! channel’s Chelsea Lately show on Monday! She has also been signed to co-host the New Year’s Eve show from NYC’s Times Square, once again, with cutie pie Anderson Cooper despite the faux paus last year.

Thinking she was at a commercial, Kathy yelled down to some guys who interrupted her: “I don’t knock the dicks out of your mouth when you’re working!” She claims that CNN has made agree to forfeit her paycheck if she does anything similarly innapropriate this year. Kathy says she’s bringing her checkbook just in case she slips.

Kathy will also play a lesbian activist on an episode of Law & Order SVU (her mother insists on calling it Law & Order SUV) and said she has a big kiss with Mariska Hargitay! We’ll have to see if that really comes to pass.

Thank you Kathy for being so great and for giving us such an energetic performance. It really felt like we were sitting there dishing with a friend.