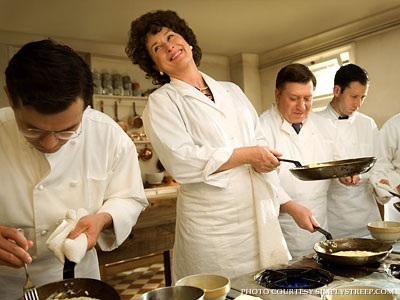 I’m hoping someone will slip a DVD of Julie & Julia into my Christmas stocking (I’ve dropped hints to family!) otherwise I would go right out buy one myself!

Love, love, love this movie! It tells Julia Child’s story of her start in the cooking profession and is intertwined with blogger Julie Powell’s 2002 challenge to cook all the recipes in Child’s first book. The fact that Julia Child is played by the glorious Meryl Streep has everything to do with why this movie is such a joy to watch. I remember leaving the theater feeling so inspired, in love with life – and with food!

Here’s an excerpt of the rave review I gave this Nora Ephron-directed movie:

Streep’s performance as Julia Child is joyous and goes well beyond being an impersonation. She captures the woman’s lust for life (and for her husband, played by Stanley Tucci), her wonderful humor and indomitable spirit and, on a few rare occasions, her pain.

This goes right to the top of Streep’s best performances and I enjoyed every minute she was on screen from Julia’s life in Paris starting in the late 40s through to her landmark cookbook Mastering the Art of French Cooking being published in the early 60s.

(It is also great to see the great Jane Lynch in her scenes as Julia’s sister who comes to Paris for a visit and ends up finding love. She and Streep have some wonderfully fun scenes together.)

In the film’s present day story, Amy Adams plays Julie Powell, a woman on the verge of 30 looking for meaning in her life. She aspires to cook all 524 recipes from Child’s cookbook and decides to blog about it. The stories were interwoven nicely as both women find themselves through cooking.

Adams is wonderful, as usual, and has terrific chemistry with on-screen husband played by an adorable Chris Messina. As a blogger myself, I related a lot to the Julie scenes in the film which capture the life of a blogger quite well – the solitary nature most times, the odd hours, the obsession with blog traffic and this often stern reminder from friends or family: “Do not put that in your blog!” 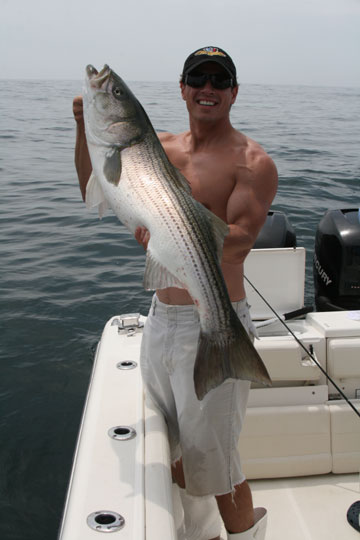 CHRIS GOES TO NIGHT SHIFT: I was hoping ABC would think about how well it worked out when NBC promoted Matt Lauer from news anchor on The Today Show to co-anchor when Bryant Gumbel departed and follow suit by replacing Diane Sawyer on Good Morning America with Chris Cuomo.

It takes a certain mix of serious and playfulness and familiarity for a morning anchor to click with viewers and Chris has that in spades. But it appears incoming ABC World News Tonight anchor Sawyer will be replaced on GMA after her stellar 10-year stint there by George Stephanopoulos.

Cuomo is expected to be leaving GMA as a result and be replaced as news anchor by JuJu Chang, according to the Los Angeles Times. But he will not be leaving the network if ABC has its way. Chris would become co-anchor of ABC’s 20-20 with Elizabeth Vargas, another former GMA newsreader passed over as co-anchor in the late 90s who, for a time, was co-anchor of World News Tonight.

Chris has also been offered expanded reporting duties which could position him for all kinds of high-profile gigs down the road. He’s still a really young guy, very bright and charming, and a terrific interviewer. I could see him as White House correspondent or GMA or evening news anchor someday.

This is all still being negotiated, The Times reports. No doubt there are other networks interested in Cuomo, He would be a lifesaver for CBS’s The Early Show which needs a shot in the arm – and in the ratings!

As for Stephanopolous, he will bring some serious news chops to GMA and is certainly not a bad choice provided he can also have some fun when the situation calls for it. No doubt he will land some really good political interviews for the program’s more hard news-oriented first hour.

AND FINALLY: I want to give a shout-out to a really cool gay-owned bar across the street from my home in Park LaBrea.

It’s called Sheddy’s Public Parlour,  a chilled out spot by the Grove on Fairfax next to the WGA-West.

Sheddy’s is  a classy neighborhood joint that is friendly and genuine but a little out of the ordinary for the LA scene. On Tuesday nights from 8pm-Close: $1 from every drink sold is donated by Sheddy’s to “Love Honor Cherish” a grass-roots organization dedicated to restoring Marriage Equality in California.

And from 5-8pm there is Happy Hour with sexy bartender Josh Reidel. Each $2 donation Love Honor Cherish gets you a free shot! There are more than 100 bottled beers and many fine wines but I can’t get enough of the unique and very delicious beers on tap. Yum!

Then there is the adorable owner, Jim Sheddy, who is friendly and smart and has the most wonderful smile and dancing eyebrows. (That’s Jim pictured above (left) and Josh on the right)