Breakfast w/Greg: Donny Osmond wins “Dancing With the Stars” and Roger Federer #1 for the year

Good morning!
I cannot believe that ridiculous two-hour season finale of Dancing With the Stars last night! They need to cut it to one-hour and cut out all of the really bad filler.
Good grief.
But I kept flipping back to it and was really happy for Donny Osmond who won!
Donny, who is nearly 52, was clearly determined to master the dances with his partner Kym Johnson. His many decades in showbiz certainly seemed to provide him with the work ethic needed to triumph over fellow finalists Kelly Osbourne and singer Mya.
The best part of the whole thing was how excited he was about winning. He wanted it, and he got it.
After winning, Donny talked to Entertainment Weekly as he prepared to fly to New York to appear on Good Morning America and The View and was asked where he ranks the experience among his many other professional experiences in music, on television and stage.
“Right at the top because I don’t think I’ve worked harder for any accolade than I have this one,” Donny said. “When you record an album and it goes platinum … yeah, you’re in the studio and you work hard for months, but it’s not like your whole body hurts. Maybe you get a little hoarse and tired. But on Dancing With the Stars, everything hurts.” 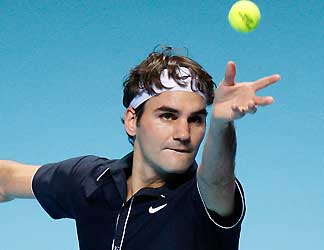 KING ROGER REIGNS: Roger Federer’s three-set win over Andy Murray at the ATP Tour Finals in London ensured he would achieve the year-end ranked number one ranking for the fifth time in his illustrious career.
Only Pete Sampras has achieved the season-ending top ranking more often: six times from 1993-98. Jimmy Connors also did it five years (1974-78).
“Obviously, that was one of my big goals for this season,” Federer said after the match. “And it’s one of the greatest performances I think I’ve achieved, you know, seeing also what happened off the court – getting married, having twin girls, reaching all four major finals. Playing so well at the most important moments, it’s been the key this year, and staying healthy. Especially after having a rough 2008, coming back this year and being able to dominate and play at the top when the depth in tennis is so, so great at the moment. I think it’s a wonderful achievement.”
Roger had dominated the rankings from 2004-07 until last season when he was dislodged by Rafael Nadal after a 237 consecutive weeks. He regained the top spot by winning the French Open for the first time and a sixth Wimbledon crown. He also finished runner-up at the Australian Open and US Open.
Congrats to Roger!