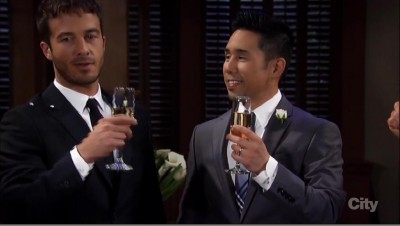 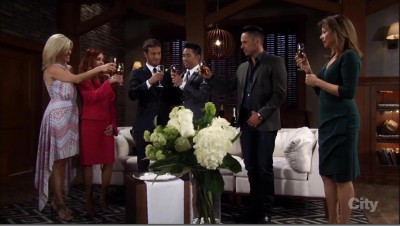 Brad and Lucas are such wonderful characters on General Hospital.

It’s a pity their romance gets such short shrift on this daytime soap.

Their wedding aired on Monday after drama involving Lucas almost dying. But it’s insulting the way their wows are just a sideshow to a murder investigation involving Lucas’ dad.

Can’t you just GIVE THE GAYS A DECENT WEDDING?

Days of Our Lives might have killed off Will Horton but at least before his death and turning a once wonderful character into a complete moron, the show gave Will and Sonny a wonderful wedding that was the entire focus of the episode.

Here are the scenes. They are crumbs and gay characters deserve more than this – especially when they are played by two such talented actors as Ryan Carnes and Perry Shen who share such wonderful chemistry.

Let’s hope this charming and sexy duo don’t get put back in mothballs now that they are wed.