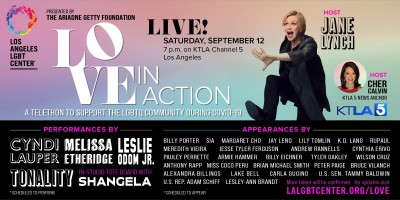 This is so exciting and I hope you will all be tuning in.

I’ve seen first-hand over the past five months of pandemic how the Los Angeles LGBT Center has been working harder than ever to meet the needs of the community. I’ve never been more proud to work for this organization and I mean that with all my heart.

On Saturday, September 12, from 7–9 p.m. PDT, the Center will host its first-ever telethon, Love in Action, presented by The Ariadne Getty Foundation, that will air live on television station KTLA 5 benefiting the Center’s vital programs and services.

Co-hosted by Emmy Award-winning actress and former member of the Center’s Board of Directors Jane Lynch and KTLA 5 news anchor Cher Calvin, the incredible two-hour fundraising show will include appearances and performances by a roster of A-list entertainers 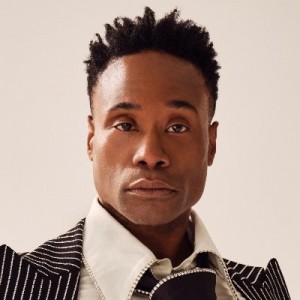 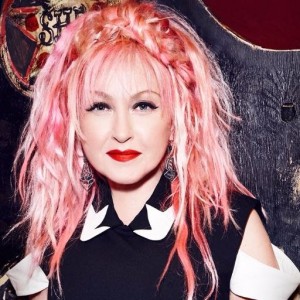 More talent to be announced!

“When COVID-19 hit, the demand for our existing services actually increased—such as health care, support for LGBTQ seniors and homeless youth, legal services, and policy advocacy. Plus, we saw new needs emerge, including growing numbers of people who had lost their jobs and were struggling to get enough food. As the Center has done for 51 years, we’ve risen to meet these changing needs. And we’ve done so at the very time that fundraising has declined dramatically,” says Center CEO Lorri L. Jean. “But without more help, this is not sustainable. Thankfully, dozens of the Center’s amazing friends from the entertainment world have lined up to help raise funds to ensure that we can continue this vital work. Through our Love in Action telethon on KTLA, they are helping inspire others to make a difference in the lives of thousands of LGBTQ people who need our help. The dollars donated on September 12 will go to work the very next day helping some of the most vulnerable people in Los Angeles. Together, with your support, we will see the true power of love in action!”

Telethon co-host Calvin says: “I am delighted and honored to be part of the fundraising efforts for the Los Angeles LGBT Center through the Love in Action telethon on KTLA. It is an important opportunity for those, who are unfamiliar with the Center, to understand how vast its impact is for the LGBTQ community from homeless youth, medical services, education to seniors and HIV and STI testing. I truly hope you can join us for this very special moment in time to raise funds for the vital services the Center provides… that save lives.” 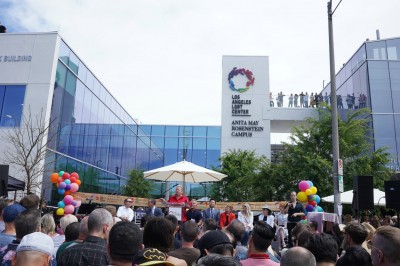 “The Los Angeles LGBT Center is a hands-on lifeline for so many in need in the LGBTQ community on any given day of the year. From healthy-cooked meals, hot showers, and emergency beds to medical, legal, and educational programs among a myriad of other services, the Center assists youth experiencing homelessness, seniors, and so many in between,” says Ariadne Getty, President and Executive Director of The Ariadne Getty Foundation. “With COVID-19, the needs and services have dramatically increased and, naturally, so has the need for more funds. As an ally and advocate of the community, I continually put my resources behind the Center when needed. This is a drastic call for help. The Love in Action live telethon is what the LGBTQ community does best: takes a problem and proactively asks members of the community to join in and support those who are in the greatest need.”

For the latest event news and information, visit lalgbtcenter.org/love and follow @lalgbtcenter on social media.