Billy Porter has in-depth interview with Tamron Hall: ” I had to teach the world how to treat me” 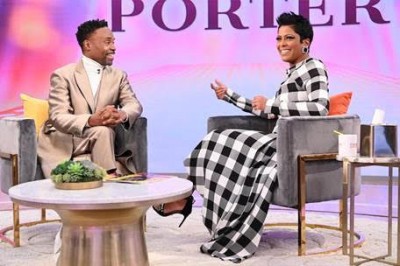 Tamron Hall spoke on her daytime show today with Emmy, Grammy and Tony award-winner Billy Porter about how he feels about being a role model for artists like Lil Nas X and everyone in the LGBTQI community.

Said Billy: “I never had an example of who I was in the mainstream reflected back at me ever. It’s been intentional for me. The moment I decided to love myself enough… You have to love yourself enough. Maya Angelou says ‘We teach people how to treat us.’ so I had to teach the world how to treat me. But I needed to treat myself right first. I needed to figure out how to love myself right first in the face of rejection for simply being who I am.”

Billy also shared how lunch with Ryan Murphy changed his perspective on both his life and career: “We had been working for the first season [of POSE] and he called me to lunch and he essentially called me out because he said ‘Okay look, I want you to lean into the joy’ and I took a breath and he said ‘I know what it’s been. I know how hard you’ve worked. I know it’s hard to trust where you are now. But I need you to know that you’re here, I got your back, and you don’t ever have to worry about anything again.’ For a person that spent 13 years not working, a bankruptcy…it just took my breath away. You just need just one person in a position of power to open the door. I wasn’t asking anybody to give me anything for free… It’s about the opportunity.”

Billy on why he had to wait until age 50 to find success and why societal norms about being more masculine were a deterrent when it came to his acting career: “I spent the majority of my life in the masculinity race. Trying to be masculine enough to get a gig. It’s all about masculinity, especially for a black man. If you’re not masculine enough, you’re dismissed. You can’t get work. You don’t get jobs, you don’t get work. It was a real thing for me my whole life, it wasn’t just the business. I was just trying to be masculine enough to get the gig and then when I was about forty, I said I’m going to take myself out of this race.”