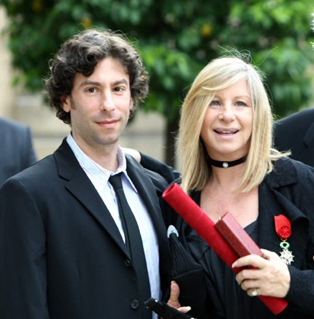 Barbra Streisand has done some pretty dazzling duets in her time with the likes of Judy Garland, Neil Diamond, Donna Summer, Tony Bennett and Celine Dion, among others.

But she is about to do what will probably be the duet most special to her: one with her son, Jason Gould.

Barbra, who directed Jason in the 1991 film The Prince of Tides, tells Katie Couric in an interview to air today that she is working on a new album of duets and one of her singing partner will be her only child who was born during her marriage to Elliot Gould.

‘When I heard the things he’s recorded, the musicianship, the sound of his voice, it’s like he has a little chamber music orchestra right in his vocal chords,’ Streisand tells Couric. ‘I don’t know what it is. His sweetness, his inventiveness musically.’

Gould, 45, is openly gay and performed in films (Boys Life 3, Say Anything)and on stage (Twilight of the Golds) although not in the past decade.

Streisand recalls singing with her son when he was a kid.

‘When I came home from work, we would sing together. And then when he was 15, I heard this gorgeous hum from behind his door.’

Although he wasn’t prepared to share his musicality with his mom then, Gould is now.

Says Streisand: ‘A few years ago he said, ‘You know I’ve started to sing and work on some music,’ and I said, ‘Really?’ And this is a tough spot to enter that profession for him, I suppose. I said, ‘Jason, I have to sing with you. You have to be on my duets album.”