WATCH: Billy Porter has a message to America 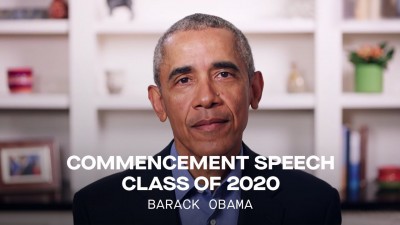 I’m happy to see President Barack Obama speaking out publicly during this critical time in our nation.

Today. he shared a message of optimism with the Class of 2020 as a part of “Dear Class of 2020,” a virtual commencement to celebrate graduates, their families, and their communities. Obama called on the Class of 2020 to seize the opportunity to create a new normal, one that is fairer, gives everyone opportunity, treats everyone equally, and builds bridges between people instead of dividing them.

He later said: “I’ll admit that it’s a little unfair to lay such a heavy burden on you. I wish that my generation had done more to solve some of our country’s big problems, so you didn’t have to. But the good news is that I know you’re up to the challenge. You are the best-educated generation in history.”

In her own remarks, Mrs. Obama said: “The tough part is, nobody has all the answers — if my generation did, trust me we’d have fixed all of this a long time ago.”

“Life will always be uncertain,” she said. “It is a lesson that most of us get the chance to learn over the course of years and years — even decades — but one that you’re learning right now.”

WATCH: Billy Porter has a message to America

WATCH: Randy Rainbow takes us along as he looks for “Bunker Boy” at The White House