Pro golfer Tadd Fujikawa: “The environment I was in made me to believe that showing femininity as a cisgender male is not right” 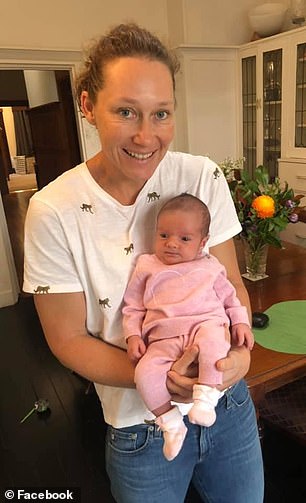 Samantha Stosur, who won the US Open in 2011 and has six grand slam doubles titles to her name, came out publicly as a lesbian recently when announcing the arrival of a baby with partner Liz Astling.

Stosur, also a former French Open finalist, said this week she will be taking the rest of the tennis year off meaning she will be missing both the US Open and the French Open which will take place weeks apart from each other in September.

Now you’ve got to think about your family, not just yourself with these decisions, and I think this is the best way for me to spend the next six months is to be at home and be with her,’ Stosur tells The Herald Sun.

She describes motherhood as ‘absolutely amazing’.

‘Even the tougher times don’t seem that bad when you just look at her little face and you just want to cuddle her and hold her all day long. It’s absolutely incredible,’ Stosur said.

But she said she’s still adjusting to becoming a mum and all the craziness that comes with it.

‘It still seems a little bit weird to say she’s my daughter, but I’ll get used to that. It’s absolutely amazing,’ she said.

She also spoken to Todd Woodbridge on Channel Nine about the life-changing decision to go public with her relationship.

Stosur said she was composing herself in the parking lot after winning the Tennis Australia Spirit of Tennis Award at the annual John Newcombe Medal event when she wanted to show proper recognition to her partner.

“I was in the car park at the end of the night and something just didn’t feel right because I’d thanked all these people who were obviously very, very important to me, but not my partner,” Stosur told Nine. “And she is a huge part of what I’ve been able to do. And who I am now. And that just didn’t sit well with me. And I thought, ‘Do you know what? Bugger this, I just want to thank her and I want to do this. So that’s why I put it on Instagram. As you get older and you’re more mature and you reflect more on things and I thought, you know what, this is who I am.”

What a whirlwind couple weeks it has been, thank you everyone for the support and well wishes. I sat down with my long-time friend Todd Woodbridge to chat about the arrival of our beautiful daughter Evie, my new life as a mum and what the future holds for me on court. #family

FILE UNDER: Coming Out, Tennis

Pro golfer Tadd Fujikawa: “The environment I was in made me to believe that showing femininity as a cisgender male is not right”