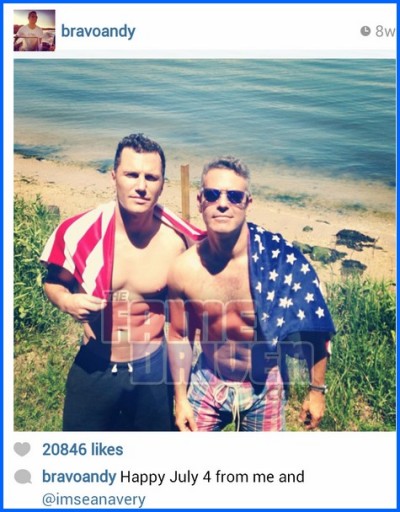 It’s twitter pics like this that started the buzz about Andy Cohen, host of Bravo’s Watch What Happens Live, being more than friends with former NHL star Sean Avery.

The rumors grew to the point where the buzz were that the two were secretly engaged.

Turns out none of it is true.

Andy was confronted by TMZ cameras in NYC and cleared it all up in about 30 seconds:

‘Dude, Sean Avery is straight. Do you understand that?’ Cohen said. ‘So a gay guy and a straight guy should be able to be friends without you asking me if we’re engaged, right? Very, very straight.’

Not that Andy wouldn’t be interested if things were different.

‘Listen, I’d be happy if Sean and I were bangin,’ he admitted. ‘But it’s not [happening].’