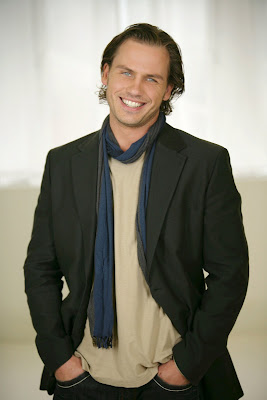 The arrival of Forbes March as Noah’s gay college adviser Mason Jarvis was supposed to spice up the gay storyline on As the World Turns forming some kind of love triangle.

But the Mason-Noah-Luke thing never really got off the ground other than Noah freaking out after Mason told him he was “cute” then later the two got stuck in a rainstorm and Noah (Jake Silbermann) missed Luke’s (Van Hansis) mom’s wedding to his biological dad.

Of course, nothing at all happened in that rainstorm, not like it surely would have with a straight couple on the show.

March, who has already filmed his final scenes on the show (they air in November)  talks to TV Guide Canada and provides some insight into why the show backed off from such a promising storyline.

TVG: Are you bummed out that World Turns didn’t develop your character, Mason, more?

FM: It was a case of a new writer [David Kreizman] coming in and the old one [Jean Passanante] going out. They literally put the Mason/Noah/Luke story into neutral. Yeah, it was frustrating but I was new there so I wasn’t aware of what was happening behind the scenes. I avoided the politics on the show because it was only a short-term role. By the time the new writer was in place, my time in Oakdale expired. I had fun, though. It wasn’t what I had hoped for, but the last few weeks were a blast. I like the way they wrote out Mason. He doesn’t die so he can always come back. 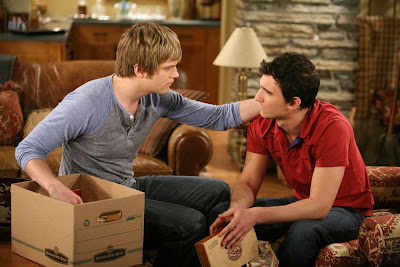 TVG: Telenext/P&G is infamous for pussyfooting around their gay storyline — was that frustrating as an actor?
FM: Yeah, it was odd. Their gay characters aren’t very gay! [Laughs]. If someone turned on the soap for the first time, I think it would take them a while to figure out Mason was gay. Let’s face it — Luke and Noah are two J. Crew guys, two of the nicest and most wholesome gay boys you’ll ever meet. World Turns needs someone like American Idol’s Adam Lambert. Because I was completely taken with Adam, I went into my World Turns’ audition with black leather pants, rock-star jewelry and snakeskin boots! I pulled all of that out for the audition to give them ideas. The looks on their faces? A resounding, “Nooo!” Mason is supposed to be a gay indie moviemaker but they ended up dressing him like freakin’ Indiana Jones! Nuke is about as gay as Bill Cosby! [Laughs] Throw a wrench in there, people. World Turns needs an extroverted, effeminate gay man on that show. Give Mason eyeshadow! But they didn’t like that. The only input they accepted from me was Mason’s endless scarf collection.

TVG: Were you disappointed with how the Mason/Noah/Luke triangle was written and played out? Or not written, as the case may be?
FM: World Turns is caught between a rock and a hard place with their gay storyline. I don’t think they anticipated two vocal, polarizing views on the Nuke storyline. I honestly don’t think America is ready for a gay storyline on a soap. It’s just too hot button of a topic. They’re criticized by the gays for not making Nuke gay enough, and then the American Family Association boycotts them. I get the sense that executive producer Christopher Goutman didn’t anticipate this kind of relentless backlash from the far right. He got hammered from each side. Any time I wanted to put my hand on Noah’s shoulder, several serious discussions ensued whether or not it would pass the mustard. Any body contact had to be cleared from higher-ups.

TVG: Hence, P&G renaming their TV wing to TeleNext! One Life to Live has a hugely successful gay storyline. So far, ABC claims there hasn’t been any negative reaction. And they allow their same-sex couples to kiss! Heck, a gaggle of gay couples are set to marry next week on the show.
FM:  Luckily, ABC owns their own soaps. Chris is trying to desperately figure out how to tell this story because he is personally invested in it, but P&G isn’t. I think Chris is a good storyteller. I like him a lot, actually. I respect him a lot which is why I was eager to work with him on this show.

TVG: What did your family think about you playing gay for pay on World Turns?
FM: My wife thought it was a great opportunity. We didn’t think much of the part until we actually learned Mason was gay. As for my daughter, Mason being gay never crossed her mind. Our family has been involved with the arts for almost 20 years. We have as many gay friends as we do straight friends. I wasn’t familiar with the show nor the boycotts from each side when I signed on. I didn’t really realize how popular and polarizing the Nuke romance is. But to answer your question, I had played gay before in Roger Newcomb’s film, Manhattanites, so it was no big deal for me to tackle this character.