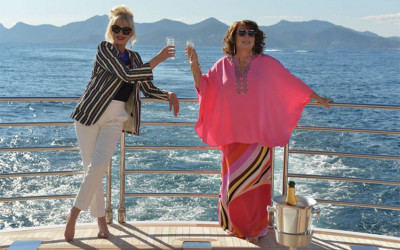 Fictional besties Edina Monsoon and Patsy Stone are back in the limelight this summer with Absolutely Fabulous: The Movie.

I’m seeing the movie at a screening on Monday and I. Can’t. Wait.

Jennifer Saunders and Joanna Lumley, the actresses who have played the zany characters on and off since 1992, are by now quite used to seeing drag versions of their alter egos.

But it took some getting used to.

‘ … The first time we saw our drag doubles was startling!’ a laughing Saunders tells PrideSource. ‘Because you realize quite how small we are, and short and insignificant, when you’re standing next to your drag doubles. They’re more glamorous than we could even hope to be!’

Adds Lumley: ‘And occasionally with a beard!’

Because they have been done in drag for decades now, Saunders considers herself to be somewhat expert on the topic by now.

‘Well, you know, the funny thing is, when they do Patsy they used to always do kind of trashy dressing,’ she says.

‘But actually, I noticed (recently) at London Pride they were very well dressed. I think Patsys are becoming better dressed, and that’s quite important for Patsy because you’ve gotta start off looking good, like you’ve got somewhere to go. Always give yourself somewhere to go.

‘By the end of the night, you can be hopeless. I mean, literally. Spread eagle.’

As for Eddy, Saunders says ‘everything’s gotta be too small.

‘Wear shoes that literally hobble you and costumes that strangle you. Remember that Eddy has never woken and not been marked by her clothing; she’s always marked. Elasticated marks everywhere on her body from the clothes.’