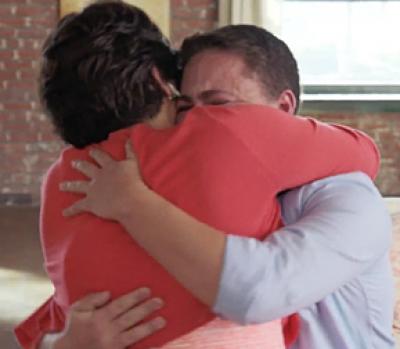 This is a Mother’s Day video that had me a little verklempt this morning.

As part of Hallmark’s #PutYourHeartToPaper campaign, a trans man named Alex shared his love and admiration for a mother who has been there for him through everything.

Alex says he was initially afraid to tell his mom, Pam, that he never felt at home in his body.

‘I thought that love would have conditions and the unconditional love that she’s shown has made me a better person in all my relationships,’ Alex says. ‘I am who I am because of who she is and who she’s been to me.’

He adds: ‘When she hugs me, she really hugs me. When you get a good hug, that is something that makes you feel safe and loved and she’s the only one who has that effect on me.’

Alex is unaware that Hallmark has Pam in the wings watching her son says such loving things about her and their relationship. When she is brought out, they hug tight and she says to him: ‘You don’t have to do anything to thank me. I’m mama bear and you’re my cub – always.’