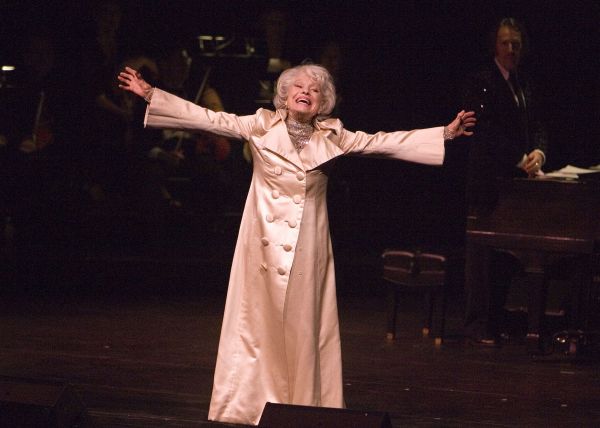 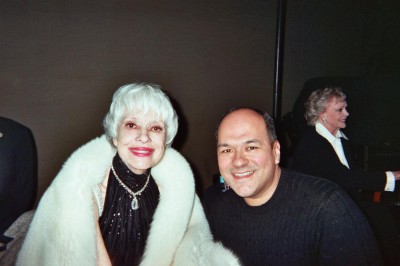 Carol Channing, who has just died at the age of 97, was one of the showbiz greats and so many people are appreciating her on this sad day.

We first met in 2006 when I was a columnist for the Los Angeles Daily News and Miss Channing was among the legendary ladies who were donating items to the Smithsonian. Others included Esther Williams, Rose Marie, Julie Newmar, Florence Henderson, Tippi Hedren and June Lockhart.

Miss Channing was with her current husband – and junior high school sweetheart – Harry Kullijian and they seemed like a coupla lovebirds. So I congratulated her on that when we spoke:

Greg: “I’m so glad you found each other.”
Carol: “Oh thank you. You must have a wonderful girl or wife.”
Greg: “Actually, if I had anybody it would be a boy.”
Carol: “Oh, well that’s alright. It’s love!”

Below is the article published in the Daily News the next day:

Carol Channing may be 87 years old and a certified Broadway legend, but the star of “Hello, Dolly!” and “Gentlemen Prefer Blondes” still feels like there is so much ahead. She’s blissfully married to her fourth husband, Harry Kullijian, who was junior high school sweetheart and looked her up after she wrote about him in her 2001 memoir “Just Lucky I Guess.” Together, they have been sweeping throughout the state of California working to restore the creative arts to the public school system. 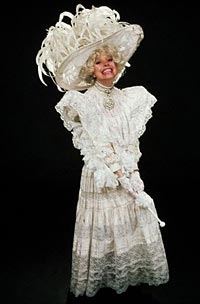 “At my age now, I can lift (kid’s) lives,” Miss Channing said when we spoke recently. “They cry, the teachers do, to see these wonderful little brains desintegrating right before our eyes and they’re looking for something to excite them and so they get into the craziest things. They’re not in love with life and that’s what the arts brings….I can see these little children growing up, exposed to the arts. Oh boy, it’s the greatest high in the world.”

If there was ever anyone who is living proof of how the arts can enhance a life, it is this three-time Tony winner and Oscar nominee:”I wanted to lift people’s lives from the fourth grade on, my first time on stage in the school auditorium,” she said. “I realized, that’s what I want to do for the rest of my life, it’s like a calling.

Her Broadway career began in 1941 and by the end of that decade, she was a huge star with such credits as “Lend An Ear,” “Wonderful Town” and “Blondes.” But it was “Dolly” in 1964 that cemented her status as one of the theater’s grand leading ladies. She stayed with the show for three years, starred in a 1978 revival then in 1995, came to Broadway one last time for another run as “Dolly” followed by a national tour.” The last “Dolly” production was the end of her heading up major theatrical productions. But she is still performing.

“I go from one great theater to another and do my one-woman show, talk about the arts, and introduce my husband,” she said.

Husbands haven’t always such a great topic for Miss Channing. She was quite young when she married writer Theodore Naidish. After their divorce, she married Canadian pro football player Alexander Carson with whom she had a son. That marriage too ended in divorce and in 1956, she married her manager and publicist, Charles Lowe. Although they were married for 42 years, she filed for divorce in 1998 and confessed that the union had never really been a happy one.

That has made her current marriage to Kullijian all the more sweet: “For the first time, everything is in front of me. Everything. It’s the happiest time in my life.”

Related posts:
** Carol Channing: “The gay community is responsible for so much of my success, and I love them.”
** Chatting up Tommy Tune and Carol Channing on Tony night…
** A recap of Carol Channing memorable – and star-studded – 95th birthday celebration
** Stars pay tribute to the ageless Carol Channing at her one woman show
** Greg’s evening with Carol Channing, Esther Williams and other legends…